Report reaching Richng is that Zimbabwe’s government has fixed a date for Robert Mugabe’s funeral.

The funeral for the long time leader will be on Saturday, September 14th 2019 and the burial ceremony will be on the following day.

This announcement comes amid a row over where the former president will be buried. 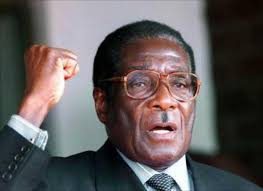 No specific location has been fixed for the next day burial but the main funeral will be at Harare National Sports stadium on Saturday, September 14th 2019.

Though members of the late long time leader Mr. Mugabe’s family are battling with the ruling Zanu PF political party over its plan to bury the former leader in a cemetery for heroes of the liberation war in the capital.

It is reported that Mugabe has a grave ready next to his first wife Sally in Heroes Acre, a North-Korea designed graveyard also home to prestigious Zanu PF supporters.
However, some of Mr Mugabe’s family want him interred in their rural village in Zvimba district, about 50 miles northwest of Harare.

They were quoted as saying "We want him buried here. Heroes, for what?" Mr Mugabe’s cousin, Josephine Jorincha, told AFP in the village of Kutama.

Mr Mugabe’s nephew, Leo, who is the family’s head of burial preparations also told the Telegraph that he was negotiating with village chiefs over the final site for Mugabe's burial.

He said that Mr Mugabe’s toppling in a 2017 coup by his former right-hand man Emerson Mnangagwa had rendered the former dictator ambivalent about being buried in the Zanu PF shrine. However, Leo said that he believed Mr Mugabe would eventually be buried in Heroes’ Acre.

He said: "I am sure he will be buried at Heroes’ Acre. We are with the chiefs, we have to consult."

Popular posts from this blog

WHY BTC2DOLLAR IS NOT A SCAM

First, I will tell you how btc2dollar.com works before I will tell you why it’s not a scam and why you need to join through my link. If you have being online before without making money or wasting your time posting only status on your timeline, today is your lucky day. With just one time $2 or N1000 investment you can become a millionaire in few months or days from now, starting from today. To join only cost you $2 or N1000 Nigerian Naira to join but because of transaction fee charged by Bitcoin sellers, it will cost you $3 dollars or N$4 to join. But if you have Bitcoin already, it will only cost you N1000 or $2 dollars and no other fee is required from your pocket forever. You will only be making profit onward. BTC2dollar is the is the cheapest, easiest & safest risk Free way to earn over $5,000,000 with just $2 as start up capital and a onetime investment in this 21 st century. My WhatsApp number +234-8037-6476-85 in case you want to private chat me. Afte
Read more

By richng - September 09, 2019
Thisdaylive Reports that  Three orphans born to Nigerian Islamic State fighters were handed over to Nigerian officials in northeast Syria on Friday, the first repatriation of children of Africans who
Read more

By richng - January 20, 2020
According to Daily Independent findings, the apprehension in the states is connected to last Tuesday’s judgment of the Supreme Court, which sacked Emeka Ihedioha of the Peoples Democratic Party (PDP) as governor of Imo State and declared Hope Uzodinma, the candidate of the All Progressives Congress (APC), as the winner of the election. There is anxiety in Kano, Sokoto, Bauchi, Benue and Plateau as the Supreme Court will today deliver judgment on the March 9, 2019 governorship election in the states.  Alhaji Uba Nana, chairman of the APC in the state, said his party had embarked on a prayer session ahead of the Supreme Court verdict. Nana, who reserved all comments till after the judgment, said the party was hoping for a successful outcome at the apex court. In Bauchi, some politicians and other stakeholders are having “sleepless nights’ as they await the outcome of Supreme Court verdict today.Supporters and members of PDP and APC had been voicing their optimism of e
Read more